At the November meeting of Diss U3A, Tony Diamond gave us a humorous talk entitled “The Six Wives of Henry VIII”.  This is a familiar historical topic, but his delivery was unusual and the illustrations were amusing. He even successfully encouraged the audience to participate in singing popular songs of the day, including, finally, Greensleeves.  He presented each of the wives in a sympathetic way, but regarded Henry VIII as a tyrant, determined to ensure the succession of the Tudors.

The next meeting of Diss U3A will be on Thursday 1st December 10.30 am in the United Reform Church, Diss. The guest speaker will be Sally Cummings whose talk will be: Women Can Fly. Refreshments will be served before the meeting. 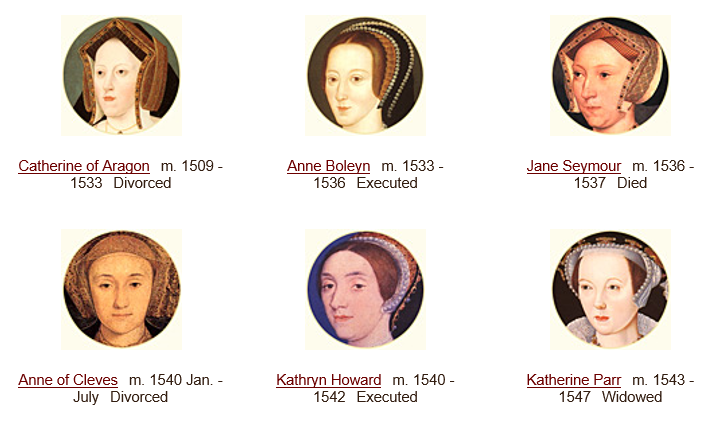 The talk began with the arrival in England of Katherine of Aragon who was betrothed to and then married Henry’s elder brother, Arthur, the Prince of Wales. She was widowed after only five months, but was kept in England so that the Crown did not lose her substantial dowry. When Henry VIII succeeded to the throne eight years later, he decided to marry Katherine. To do this he needed the permission of the Pope, and the significant question was whether the first marriage had been consummated. There was contradictory advice in the bible, but the Pope was encouraged to give consent. Katherine was popular with the people and led the victory over the Scots at the Battle of Flodden while Henry was fighting in France. She bore Henry a daughter Mary, but failed to produce a son.

Henry was keen to ensure the Tudor succession by producing a male heir. Eventually he decided to divorce Katherine on the grounds that her marriage to his brother had been consummated. She was sent to Kimbolton Castle until she died in 1536.

Henry then married Anne Boleyn who was pregnant with his child. She too had a daughter, Elizabeth, but had no surviving sons. Tony Diamond was sympathetic towards Anne and did not think that she was guilty of the charges of adultery, witchcraft and incest which led to her execution.  A day after her death, Henry married Jane Seymour. This appeared to be a happy marriage and Jane gave birth to a son Edward. Jane died shortly afterwards and is buried in St George’s Chapel Windsor.

Three years later Henry married Anne of Cleves. Henry disliked her as a wife and had that marriage annulled. He treated her generously however, accommodating her at Hever Castle, and referring to her as his “loving sister” She is buried in Westminster Abbey.

Katherine Howard was the next wife and was married to Henry for one year before being charged with adultery and being executed. Tony Diamond believes that Katherine was probably guilty.

The sixth and final wife was Katherine Parr. She was 31 and had been widowed twice. She was very accomplished and translated sections of the bible from the Greek into English, working closely with the Princesses Mary and Elizabeth. She too was accused of witchcraft at one point but her wise answers to Henry’s questions meant that the charge was dropped. She outlived Henry, and after Henry’s death married Thomas Seymour and lived at Wolf Hall.

Henry was buried with his third wife, Jane, at St George’s chapel.