Reinhild Raistrick is a botanical artist, born in Tanzania and now living in Suffolk.  She has painted wild flowers in various parts of the world, ranging from the Tien Shan Mountains, Kazakhstan to the Mediterranean, from East and South Africa to the British Isles. In 1991 – 1992 she was involved in painting flowers of the equatorial rainforests, Tanzania. A number of her flower paintings from there were purchased by the Royal Botanic Gardens, Kew for their permanent collection. Some of her work is featured in the Curtis’s Botanical Magazine. The August 2000 edition devoted a whole issue on the Genus Fritillaria, using her paintings.  She exhibits both locally and nationally and has been awarded four Gold Medals by the Royal Horticultural Society. Reinhild tutors in Botanical Painting at the Cambridge University Botanic Garden, as well as other centres.   Her great love and interest is painting wild flowers in situ.

The next meeting of Diss U3A will be on Thursday 4th June 2015, at Diss United Reform Church, starting at 10.30 a.m.  The guest speaker will be Basil Abbott  who will give a talk entitled, “The R34 Adventure  The First Transatlantic Return Flight”

Reinhild is a member of the Society of Botanical Artists, with whom she regularly exhibits. She is also one of the tutors for the SBA Distance Learning Diploma Course. She is also a member of the newly formed East Anglian Iceni Botanical Artists. As well as exhibiting annually, the group have commenced a project on illustrating and recording the rare and endangered Breckland Flora. 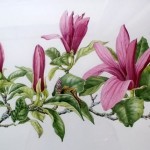 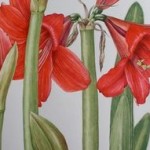 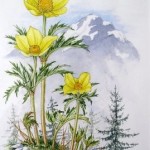 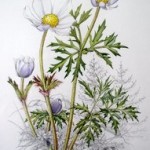 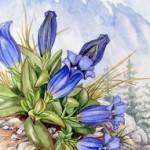 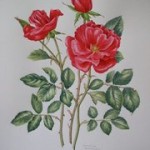 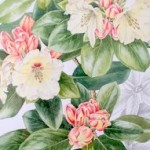 Reinhild talked mainly about her work in Tanzania, identifying rare wild flowers.  She spends many hours carefully drawing the flowers and recording the exact colours in her sketch book. Her paint box is tiny! Photos are only used to identify the features of the flower’s habitat, not to aid her painting, which is carried out back in her studio. She uses a light box to lightly trace the detailed drawing and then paints. We were shown several of her beautiful original paintings. One of her projects has been to find as many species of African Violet as possible. These grow in a small Kenyan forest. She always takes a local guide with her up in the mountains as the wild pigs are a potential danger. After seven years she has identified 27 different species of African Violet!

A particularly stunning flower, found in South Africa – on the beach, is The Paintbrush Lily (Haemanthus coccineus).

Reinhild quoted Dr Roy Strong who believes that “today’s artists paint what may never be seen again.” Many rare plants are under threat as a result of global warming and man-made changes to the landscape.  Thus, there is no doubt Reinhild’s work, recording these flowers will be remembered many years ahead.

Reinhild has an exhibition in St Edmunds Gallery Bury St Edmunds from 27th June until the 9th July.