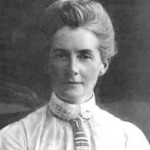 ‘Edith Cavell – a British Heroine’ – Richard Mann. This is one of many talks given by the Lowestoft Illustrated Talks Company who are currently raising money for the Leprosy Society.

Richard kept us absorbed in his story of the challenges that Edith Cavell faced during the First World War. Her story is particularly poignant since she was brought up so close to Norwich and is now buried in the cathedral cemetery.

The next meeting of Diss U3A will be on Thursday 8th January 2015, commencing at 10.30, at Diss United Reform Church. Please note, this meeting is one week later than usual due to January 1st being a public bank holiday and New Year’s Day.   The guest speaker will be Jon Read who will give a talk called, ‘Steel Yourself – the story of Old Hall stainless steel tableware’.

Edith (born 1865) was the daughter of a curate, Fred Cavell, who settled in Swardeston, married Louisa Warming and had four children, three daughters and a son. Edith was a caring and compassionate child and helped look after her brother and sisters.  They often visited Fred’s brother, a lawyer from Saxmundham, where Edith became very close to her cousin, Edward.

She was taught at home, learned to draw and paint and generally, was compliant, although she was caught smoking (aged 16) and was then sent (1881) to Norwich High School, a walking distance of four and a half miles! She became a pupil teacher in Peterborough under the stern direction of a Miss Gibson.  She stayed until she was 21 and then went home to help her mother.  After this she became a governess in Essex until she decided to go to Brussels, again as governess. By this time, Edith used a small legacy to travel to the continent. She had visited Austria and Bavaria, and was very impressed with a free hospital run by a Dr Wolfenberg. When her father became ill, Edith returned home to help nurse him and perhaps this was the time when she considered becoming a nurse.

At this time, nurses carried out almost exclusively, domestic chores.  Medical work was outside their domain and training was virtually non-existent. Edith chose to go to London and worked in the Fountains Fever hospital in Tooting.  This was a free hospital and was occupied by many old and mentally ill patients.  As luck would have it, the matron, Miss Eva Luckes, did believe in medical training and accepted Edith for nursing training at the Royal London Hospital.  Edith was a devout Christian who treasured her copy of the bible as well as a copy of Thomas a Kempis’s ‘Imitation of Christ’. Edith was often seen praying quietly beside dying patients.  In 1897 Edith went to help in a hospital in Kent where there was an outbreak of typhoid.  Edith completed her training in 1891 and became night matron in a Poor Law Institution in St Pancras. She then became a much loved assistant matron in Shoreditch and was known for her compassion, for example, using her meagre earnings to pay for a day out on the coast for a dying 5 year old child.

Next, Edith became district nurse in Manchester and, aged 42, she was recommended to a well-known surgeon, Dr Antoine Depage, to help set up a training institute for nurses in Belgium.  This was her next challenge and she quickly found out that there was a huge

amount to do to establish the clinic and the teaching school.  In 1910, the Belgium government set up a register for trained nurses and by 1912, sixty nurses had completed their training.

The outbreak of war had a huge impact on the clinic. In August 1914, the Germans crossed the Belgium border. Edith, who was in England at the time, hurried back to help in the clinic.  She devoted her last year to nursing wounded soldiers in the clinic that was now used as a Red Cross hospital. Her care and compassion extended to soldiers of all nationalities and thus, even though it was strictly forbidden, she began to treat injured English soldiers as well as French and German. This began when she hid two British soldiers in the clinic for two weeks.  After this she was asked to join an underground group to help other soldiers escape to neutral territory. Edith hid almost 200 allied men at the Berkendael Institute, whilst they were waiting for Philippe Baucq, an architect, to organise guides to take them across the borders. Tragically, they were discovered, betrayed by a Frenchman, Gaston Quien and Edith was arrested, along with Philip Baucq.

Edith was locked up in Cell 23 in St Gilles Prison.  She was kept for 9 weeks in solitary confinement and interrogated repeatedly. Her trial began on 8th October 1915 and the defence lawyers failed to save her from a guilty verdict. On 11th October, Edith learned that she would be executed the following morning at 6 am despite the last minute intervention of the Spanish and American ambassadors.

The execution, by eight soldiers, of Edith and Philip Baucq, himself a father, was particularly horrifying as Edith was, probably deliberately, shot in the face, an act of deliberate mutilation by one of the firing squad.  There was an outraged reaction and many posters and postcards were published accusing the Germans of murder, assassination and bestiality. She was buried with a wooden cross, next to St Gilles Prison.

After the armistice, Edith’s body was exhumed and brought to Westminster.  There were crowds in Dover, Westminster and in Norwich, where the funeral cortège finally arrived.  Edith is buried outside Norwich Cathedral and has memorials in Swardeston (a stained glass window in the church), Norwich, Westminster and Brussels (including her prison cell) as well as in Canada, where a mountain has been named after her. Edith saved many lives and the allies from the First World War will never forget her courage.  Before she was shot she calmly declared ”I have seen death so many times, it is not strange or painful to me.”

“This window was given by many friends and admirers to commemorate the devoted life and tragic death of Edith Louisa Cavell, Head of the First Training School for Nurses in Belgium, who was born and brought up in this parish, of which her father was Vicar from 1863 to 1909, and who died for her Country on October 12th, 1915, aged 49 years, being shot by order of a German Court Martial in Brussels, for having rendered help to fugitive British, French, and Belgian Soldiers. The Artist who designed the window, and the Craftsmen who made it, gave their services as their contribution to this Memorial, A.D. 1917″

To find out more about Edith Cavell you might like to look up: http://historysheroes.e2bn.org/hero/timeline/86 for a more detailed chronology of her life and work.